"You buried the problem. Which seems to be your general approach to life right now."
—Morgan to Claire on how she’s dealing with things since her mom died.

"45-Degree Angle" is the sixth episode of Season 3 of The Good Doctor. It is the forty-second episode overall, and aired on November 4, 2019.

Dr. Andrews walks into San Jose St. Bonaventure Hospital and sees that only one nurse is working in the general vicinity. He asks her what happened to all the nurses.

In another part of the hospital, Shaun is practicing for his second try at his first surgery. This one being an open appendectomy, where he will be assisted by Claire. Dr. Andrews walks midway through Shaun’s practice run of his surgery. When he tells Shaun that some of the nurse staff he is using to rehearse need to get back to their stations. Shaun says that they can stay here because Chief Lim assigned them all to him, and told Shaun to rehearse with all of them unless or until there’s an emergency on their floor. Morgan is there to stand in for Claire, who couldn’t make it for the rehearsal because she had a dentist appointment in the morning.

Dr. Lim later explains to Dr. Andrews that their residents are not homogenous, when he asks why Shaun gets a full rehearsal, but Claire didn’t. She argues that each one of them requires different training. While acting as Claire, Morgan asks Shaun how things are going with Carly. He says fine because they make out a lot. He eventually says that he asked her out to play Chinese checkers, but she told him that she was busy. Shaun then goes onto say that he could hear people laughing in the background.

One of the nurses says that in her opinion, Carly’s behavior is odd. When asked to elaborate, she explains that Carly, it seems is not treating Shaun like a boyfriend because you don’t exclude your significant other from a get-together. Another nurse suggests that it could have been a family thing, and another nurse theorizes that perhaps Carly might think that it’s too soon to introduce Shaun to her friends and family. Another nurse says it could also be possible that there was no get-together, and what heard might have been the television. The first nurse asks Shaun, if Carly has ever referred to him as her boyfriend. Shaun doesn’t say anything, and instead says he’s practiced enough, and dismisses the staff.

Meanwhile Debbie comes to Aaron, and tells him that she’s been fired because she was giving away free coffee which is against the hospital’s policy. At their home, she then suggests she can come work for him. Especially given how his office manager is never there. She mentions how with her nursing experience, she can handle appointments and to triage on walk-ins. However, at first Aaron mentions that’s not something they have the budget for . Debbie calls him out on that horse crap, and he admits that he doesn’t think a couple being around each other 24/7 is a good idea. Debbie goes back to looking for another job, but says that the hospital felt like home and she was happy there.

Later, Dr. Lim calls Dr. Melendez went into her office for not running a complex procedure by her. When his patients begin to experience blurry vision, he is paged to her room. Afterwards Alex mentions how the arterial embolization was rejected above the bladder. That the mass inside the patient is seeping blood. As a result, they have to go in again, or she’ll slowly bleed to death. Dr. Melendez says that even with maximal NICU support, the baby’s chance of survival is at around 15-20%. Before they book an OR, Neil goes to Audrey to get her approval.

Neil makes his case with Patty and her husband about which choice they want. Patty wants to do the riskier surgery if it means keeping the baby. But her husband wants to opt for the safer option. She argues that it’s her choice because she’s the one carrying the baby and going through the surgery. The husband admits that he didn’t want the baby, and that they can have another child. However, Patty says she doesn’t want another baby. So she agrees to do the riskier procedure that gives the baby a better chance of survival.

Meanwhile, in Shaun’s first surgery as lead surgeon, he eventually ends up asking Nurse Hawks to leave the OR when she doesn't give him the clamp the right way. Claire looks to Marcus to see if he will intervene, but continues to stay in the back, monitoring Shaun instead.

After his surgery, Dr. Lim tells Shaun he needs to apologize to Nurse Hawks since he didn’t properly explain to her how he wanted the clamp to be handed to him. However, instead of apologizing, he just tries to explain to her why he’s right. She asks Shaun to go away, but he doesn’t listen. So instead, she gets up, throws her lunch away and walks away from Shaun.

Dr. Lim confronts Shaun about the lack of apology, and tells him that Nurse Hawks has filed a complaint. She tells him that if another instance like this happens, it will be the end of his residency.

Patty’s surgery ends up going awry, and flatilines. They open the uterus, and take the baby out. Some time later, Neil goes to talk to Patty’s husband to break the news to him that she died.

Elsewhere, Shaun and Carly sit down to talk and as a result, they end up defining their relationship.

In his living room, Neil sits on a couch nursing a beer. Audrey comes over and sits down with him as he gets emotional over losing Patty. 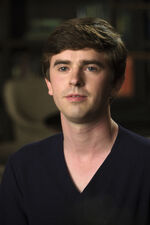 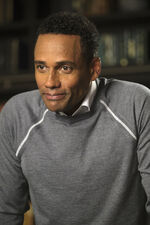 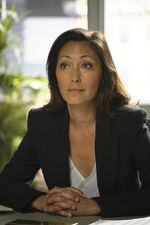 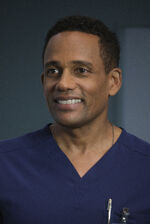 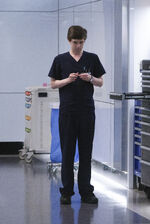 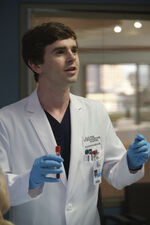 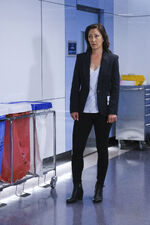 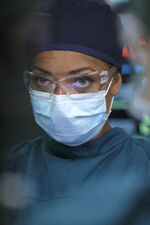 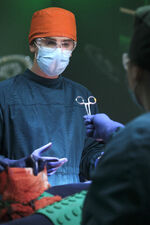