View source
watch 01:49
'The Good Doctor' Profile: Aaron Glassman
Do you like this video?
Play Sound

"Aren't we judged by how we treat people? I don't mean as doctors. I mean as people. Especially those who who don't have the same advantages that we have. We hire Shaun, and we give hope to those people with limitations that those limitations are not what they think they are, that they do have a shot!"
—Aaron Glassman[src]

Dr. Aaron Glassman is the president and a surgeon at St. Bonaventure Hospital. He acts as a fatherly figure to Dr. Shaun Murphy, having known him since he was a young teenager. He cares very deeply about Shaun, even to the point where Shaun feels suffocated by it. He backs off when Shaun wants to leave the hospital, saying he wants to make his own mistakes and get out from underneath Glassman's wing. He also shows a great deal of caring towards other hospital staff, such as when Claire makes a minor mistake that turns out to be fatal for a surgical patient. He has recently been diagnosed with a presumably inoperable glioma and will have to go through chemotherapy and radiation therapy, predicted to be seen in the second season.

Glassman is shown to be lonely, due to his wife and kids having left him. While their reason for leaving is a bit unclear, it was presumably because he spent so much time on work and caring for his patients.

In season 3, after leaving St. Bonaventure following his cancer treatment, Glassman is offered the position of president of the hospital back and ultimately accepts the job.

Aaron has been a doctor for at least 20 years (the exact length of time is unknown). He lived and practiced as a doctor in Casper, Wyoming at one point before relocating to San Jose.

Around a decade prior to the start of the show, he met Shaun and Steve Murphy when they arrived at his office on foot. The brothers had hoped he would be able to save Shaun's pet rabbit, though it had already died when their father threw it against the wall. When Shaun asked if the rabbit had gone to heaven, Glassman awkwardly replied he was sure that was what had happened.

By the time Shaun and Aaron reconnected, Steve had died and Shaun was to be taken back to his parents. He refused to go home, and police were lost on what to do with him. Glassman decided to take the boy in for the night, and promised him tomorrow they’d “figure out the rest." Ultimately, he ended up acting as a surrogate father to Shaun well into the future.

At the end of season 1, Glassman is diagnosed with brain cancer. Thanks to Shaun's insistence on testing, the cancer is determined to be treatable.

Throughout season 2, Glassman undergoes treatment for his cancer while dealing with the various side effects, including an increasing degree of memory loss.

At the end of "Quarantine," Glassman discovers that his cancer has apparently returned. In "Quarantine: Part Two," Glassman is diagnosed as having meningitis instead of his cancer having returned which explains his memory loss and is treatable.

In "Aftermath," Glassman makes the decision to accelerate his cancer treatment after his successful meningitis surgery. He completes his chemotherapy in "Believe." In "Breakdown," Glassman's final test results show him to be completely cancer free. His personal thank-you gift to Dr. Blaize leads her to suggest that Glassman's ordeal has changed him for the better.

In "Trampoline," Glassman attempts to propose to Debbie who rejects him at first, but later accepts his proposal. He also reveals to Lea Shaun's feelings for her after Shaun ends up in the hospital following a fight at a bar. Though no longer President of the hospital, Glassman remains on the board and fights to get Shaun rehired, using Shaun's ability to inspire Claire to see things through his eyes to save a patient as proof that he belongs at the hospital. To everyone's surprise, Andrews backs Glassman up and fires Han in order to be able to rehire Shaun.

In "Disaster," Glassman has quit his job at St. Bonaventure and now works at a clinic, trying to make a difference with a new outlook on life. Glassman is visited by Ms. Aoki trying to get him to return to the hospital, but he refuses. When Glassman is late for lunch, Shaun visits him at the clinic and tells Glassman some of the story of his date with Carly Lever. Shaun realizes that Glassman's patient has an infection in his foot from diabetes and helps Glassman treat the man. Aoki later visits the clinic and offers to reopen St. Bonaventure's clinic if Glassman will return as President. When she offers to let Glassman keep his office in the clinic, he accepts the offer.

In "Take My Hand," Glassman prepares to marry Debbie in a small civil ceremony, but has cold feet after realizes how little he knows about her and his own fears about a failed marriage. Debbie urges Glassman to take a chance and he later solicits advice from Shaun for the very first time. Shaun inadvertently helps Glassman by pointing out how Glassman now refers to his ex as his first wife, suggesting that in Glassman's mind, he is ready for a second one. To symbolize asking Debbie to take the leap with him, Glassman jumps on a small trampoline in his office when he asks her, but ends up falling and hurting his ankle. Now on crutches, Glassman marries Debbie at City Hall in a ceremony attended by Shaun and his girlfriend Carly Lever.

In "Mutations," Glassman continues to treat Morgan for her rheumatoid arthritis, though Morgan tries to hide the severity of the side effects of her medication. Morgan also pushes Glassman to leave the clinic and return to neurosurgery despite the fact that Glassman hasn't been in an operating room for over a year and even then it was as a patient rather than the doctor. Melendez later consults with Glassman on the case of Angie Valens, a teenager whose brain tumor has returned. Glassman warns the two that the surgery could be extremely nasty depending on how far the tumor has invaded her brain and Melendez asks for is help, even just supervising the surgery. Glassman ultimately chooses to observe and use his experience to help guide Melendez and Claire, but the tumor proves to be impossible to remove with even Glassman unable to think of a solution. Angie dies shortly afterwards from a seizure and Morgan confesses to her side effects and finally agrees with Glassman's recommendation to change her medication.

In "Parenting," Shaun enlists the help of Glassman and Morgan to prepare his meeting Lea's parents for the first time. After a rather awkward attempt at getting Shaun through small talk, Glassman points out the very real concerns that Lea's parents will have about Shaun and Lea's relationship that he needs to be prepared for, concerns that Glassman himself shares. Shaun calls Glassman out on his dislike for Lea, but Glassman tells Shaun that he's never actually said that.

Glassman later sees Lea at work and admits that he actually likes her, calling Lea smart, funny and someone who can make Shaun very happy. However, he knows that she can also make Shaun very, very sad which concerns him greatly. Lea reassures Glassman that she doesn't plan on hurting Shaun, but he knows that it's rarely intentional. Lea admits that her parents have an issue with Shaun and that she doesn't want Glassman, Shaun's parent, to have an issue with her as well. Getting emotional, Glassman tells Lea that he feels all of the highs and lows that Shaun has had to go through in his life and that he will not stop worrying about him even if Shaun doesn't need him to.

Concerned about Lim's PTSD and refusal to seek treatment, Claire reports her to Glassman.

In "Waiting," Shaun enlists Glassman's help as a neurosurgeon to try to find a way to save a young boy, Ethan, with a bullet fragment in his brain. However, Glassman can't find anything that Shaun missed and comforts a devastated Shaun who is taking it hard. 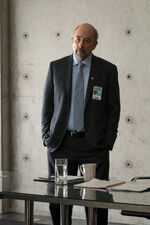 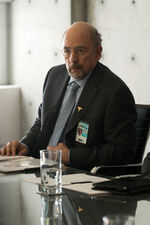 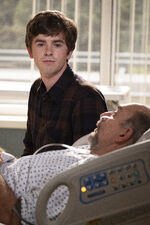 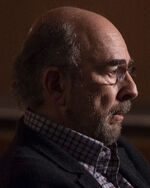 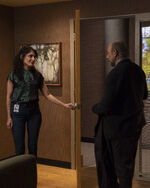 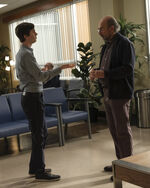 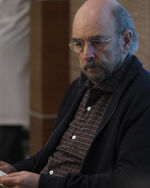 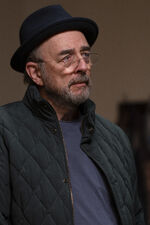 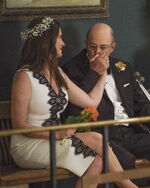 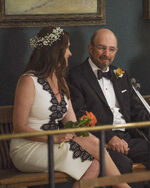