Heartfelt
Dr. Alex Park is a ex-cop who decided to become a doctor. He was a police officer for 15 years before deciding to switch to medicine. He has a cynical personality because he has seen the worst of people. He has a teenage son named Kellan with whom he is estranged.

At some point in his life, he met Mia Wuellner and the two got married and had a son, Kellan Park. Sometime later, Alex caught his wife with another man and the two separated.[2] Park worked in the police force for 15 years before coming to the decision that he wanted to go into medicine and went to medical school. Once graduating, he got a job as a surgical resident at San Jose St. Bonaventure Hospital, where he worked alongside his attending, Dr. Matt Coyle.[1] Park's father is a Tae-Kwon Do Grand Master who trained Park in the art growing up.[3]

After Dr. Matt Coyle was transferred out of the department due to allegations about sexual harassment, Alex Park along with the other residents on his service, including Morgan Reznick were redistributed to other attendings. Both Alex and Morgan were eventually transferred to Dr. Neil Melendez.[1]

In "Stories," Park treats a teenager, Finn, whose parents don't believe in vaccines. Park tries to convince the parents to change their minds and vaccinates Finn after his mother claims they changed their minds. However, she turns out to have lied, causing a rift in her marriage. Park emotionally tries to change the husband's mind, using the story of his and Mia's marriage falling apart, though he claims it happened to a friend of his. When the husband doesn't buy it, Park claims that he made the story up.

In "Quarantine," Park's son Kellan comes for a visit at Christmastime and becomes trapped in the ER when a viral outbreak creates a quarantine.

In "Quarantine: Part Two," after Kellan suffers an asthma attack, Park risks his life and his job to break quarantine and help Kellan. Park performs a bone marrow extraction on a father whose regrets regarding his family mirror Park's own. After the man dies of complications, Park reconciles with his son who had helped Shaun save a mother and newborn baby. At the end of the quarantine, Park for once allows himself to become emotional over what he has experienced and accepts comfort from his ex-wife Mia when she arrives to pick up Kellan.

In "Aftermath," Park begins a reconciliation of his marriage with Mia.

In "Xin," Park tells Claire about trying to repair his relationship with Mia as part of being more open with people. He helps to treat Sunny Lee, a woman with a mechanical heart, a surrogate daughter and a biological daughter she has been estranged from for 15 years. Park urges Sunny's daughter Grace to make peace with her mother, reminding the young woman that the first thing Sunny said when she saw Grace was not a criticism but that she thought her daughter looked pretty. After a successful surgery to repair Sunny's heart, Grace takes Park's advice and begins mending her relationship with her mother.

In "Disaster," Park competes with Morgan to become the first resident to lead their own surgery. The two get the case of an elderly man with dementia who also has treatable kidney cancer. However, Park eventually begins advocating to the man's wife to leave the cancer untreated so that he can enjoy the time he has left rather than linger for years with dementia. With Morgan's help, Park convinces the wife to discontinue treatment beyond symptom management.

In "Debts," Park continues to compete with Morgan with both trying to kiss up to Lim who is aware of what they are doing. Lim ultimately decides to give the first surgery to Claire Browne and Park tells Morgan that more than anything, he didn't want Morgan to become Chief Resident as he found the thought of Morgan as his boss to be a nightmare. Park offers Shaun advice about his relationship with Dr. Carly Lever, using his own disastrous first date with Mia as an example. Though Park and Mia later got divorced, Park states that it was all worth it.

In "Claire," Park and Morgan treat Shamus O'Malley, a man with a giant marlin impaled in his leg who is more worried about the fish's safety. After an MRI causes the marlin to explode, Shamus has to be rushed into emergency surgery to fix a severed femoral artery. However, his condition deteriorates, confusing Morgan and Park until Claire realizes that Shamus has cancer in his leg. Shamus' leg has to be amputated and Shamus is excited to be presented with the now-stuffed marlin by his friends as the injury caused the discovery of Shamus' cancer and saved his life.

In "First Case, Second Base," Park works with Shaun on the case of Beth, an esophageal cancer patient whose surgery was originally slated to be Park's first as lead surgeon. Though disappointed, Park tells Shaun that he is happy for him and later offers Glassman advice based on his own experiences with owning a gun due to Glassman being uncomfortable with Debbie having one. Park is part of Lim's handpicked surgical team for Beth's surgery, which Park and Shaun had previously discovered would require her to have a feeding tube for the rest of her life. After Shaun storms out, apparently in the middle of a meltdown, Lim assigns Park to finish the surgery. However, Park refuses, recognizing that Shaun may have seen something and be having trouble communicating it to them rather than having a meltdown. Park gets Shaun to calm down and explain that he had earlier learned about a Japanese procedure that could fix the issue, but one too complicated for Shaun himself to perform. As Shaun guides Lim and Andrews through the surgery, another doctor calls for Park's help and Lim sends him out, telling Park to go where he is needed. After the surgeries are over, Park reveals that the call had been an appendectomy which he had been allowed to take lead on. Park expresses his condolences that Shaun missed his chance at his first lead surgery while Shaun congratulates his friend on Park's first lead surgery. 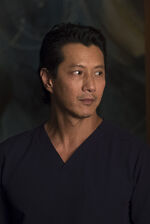 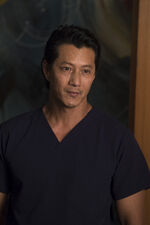 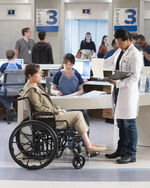 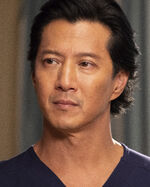 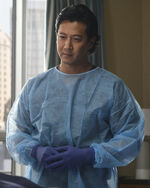 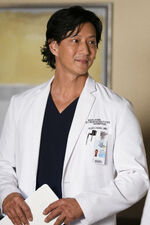 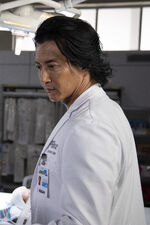 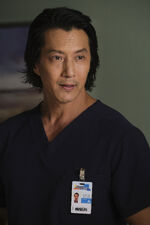