"Intangibles"
"Apple" is the eighth episode of Season 1 of The Good Doctor. The episode aired on November 20, 2017.

During a robbery at the grocery mart Dr. Shaun Murphy is shopping at, his communication limitations puts lives at risk. Meanwhile, after Shaun’s traumatic day, Dr. Aaron Glassman worries that he isn’t doing enough to help Shaun.[2]

Shaun's neighbor Lea comes over to his apartment to complain about their landlord while Shaun is preparing for his day. She takes a bite of his apple (carefully selected to round out his nutritional profile) before storming out, offended that Shaun did not support her position in the argument with the landlord. Shaun stops at a market to replace his apple but the market gets robbed. Shaun stims out of stress and paces instead of responding to the robber's demands. The robber becomes frantic and shoots; the bullet inadvertently hits a female customer who was there with her date. The robber is then smashed across the neck by a man with a baseball bat.

Shaun, unharmed, accompanies the injured woman and her date to the hospital. The robber is also there, having been injured by the bat. The woman's date spots Shaun at the emergency department and demands to know why he is present, stating, "This is all his fault!"

Dr. Melendez (Nicholas Gonzalez) tries to ascertain what happened and tells Shaun to go home once he has given his statement to the police. Shaun, however, has other ideas and is not planning on going anywhere. Melendez deduces that he is OK and allows him to stay and help.

Both patients are rushed to surgery with the respective surgeons.

Claire finds herself not being in the operating room (OR) for very long though as she makes it clear that she is not comfortable helping the shooter, especially when they notice his tattoo advertising that he is a Nazi. She speaks disrespectfully to Dr. Lim who subsequently asks Claire to leave the OR and send in a replacement.

Shaun is now in the OR with Melendez and Kalu as they battle to save their young gunshot victim. Shaun begins to suture the wounds in a display that looked like a well-performed ballet.

She is stabilized for now but the next 24 hours will be tough.

Claire’s Nazi patient also gets through the surgery and Dr. Lim puts Claire on babysitting duties, much to her displeasure.

Shaun has a meeting with the hospital psychologist, who assesses him but is unable to determine whether his involvement with the gunshot victim's treatment will be soothing or upsetting to him. Dr. Glassman is frustrated by her inability to predict how Shaun will respond to the trauma, but she says that she has had only limited opportunity to observe him, and states, "He has a unique mind and an extremely introverted nature."

Melendez is monitoring our gunshot patient and begins telling her boyfriend that the next 24 hours are crucial as the possibility of organ failure is high. Desperate to help, he asks what he can do. Melendez needs consent forms signed and she will need support so contacting her parents would be a great start.

This is much easier said than done as he explains that this was actually their very first date, they had only just met and she had not brought her purse, he doesn’t even know her last name.

Melendez tells him that he doesn’t need to be there and social services can take over. He refuses to go and is allowed to stay for as long as he needs.

Glassman eventually manages to catch up with Shaun and pulls him aside to talk. Shaun is not very pleased with this as he was in the middle of trying to get an apple.

Glassman tries to talk to him about what happened in the store. Shaun explains that it wasn’t his fault. That what he did was not the reason for the girl to be shot.

Glassman listens and tries to explain that Shaun is right but his actions may have resulted in this happening.

Shaun responds by telling him that he wasn’t there. This strikes a nerve with Glassman who admits that yes, he wasn’t there. That he hasn’t been there that much and he needs to be there for him more. That even though Shaun is perfectly capable of doing many things himself he still needs some help.

Shaun returns to his patient, anxious to get away from talking more about what happened.

Shaun begins checking his patient’s vitals under the watchful gaze of her date. Concerned that her urine output is low and something is wrong he begins pulling back her sheet to examine her only for her date to intervene, clearly untrustworthy of Shaun. He is restrained by hospital staff as Shaun pulls the sheet off of the patient's legs. Everyone is surprised as the patient’s legs are twice the size they should be.

Melendez and Shaun work fast to save her. The date is still untrustworthy and questions  why Melendez is letting Shaun do anything which promptly leads to him being told to shut up. They manage to stabilize her and while Shaun finishes up, Melendez pulls the date aside and tells him, "You barely know her...and you don't know him [Shaun] at all. Go home."

Claire's patient is revealed to be an opiate addict, and consequently, the hospital pain meds are not managing his discomfort. He complains that his neck hurts and asks that Claire give him fentanyl, but she refuses. He states that she is punishing him for being a Nazi by refusing to treat his pain; she disagrees, and he suggests that she doesn't like addicts, theorizing that this is because her mother might have been an addict. Claire becomes angry and leaves his bedside to demand that Dr. Lim let her stop babysitting him, arguing that a nurse could monitor him and that Dr. Lim is punishing her for disagreeing. Dr. Lim, who is being assisted by two nurses as she works on another patient, points out that this insubordination in front of two nurses is undermining her authority, something she has had male colleagues do to her throughout her career. "We shouldn't do it to each other," she says, and tells Claire to continue monitoring her Nazi patient.

Meanwhile, Shaun is assessing his patient's vitals when her date confides that he had taken his date to the market in order to avoid his date with her, and therefore her injury is his fault. Shaun begins to tell him that he is not at fault when her monitors begin beeping. She is losing heart function. It looks like multi-organ failure and they need to figure out what is going on, fast. Shaun believes that the heart is failing and they need to take steps to stops this but Kalu notes that her hematocrit has dropped, and that this might mean that she is bleeding somewhere which is causing the heart to not work as effectively. He states they need to operate.

Melendez has a tough call to make between Shaun and Kalu's competing theories. He sides with Kalu and they head back to the OR.

Claire’s day is just getting harder. Her patient appears to be having difficulty breathing and when she removes the bandage from his neck she is greeted by the sight of his neck being 3x bigger than normal.

In the OR, the surgeons quickly discover that Kalu was right after all--the patient is bleeding internally. Melendez and Kalu are struggling to locate the source of the bleed; Shaun is looking on.  They discuss their options as the clock is ticking away, fast. They have no idea where to begin looking. The bleed could be anywhere.

Claire pages for Dr. Lim but action needs to be taken now, she gets a suture kit and prepares to perform surgery there and then.

Shaun looks thoughtful as Melendez and Kalu are deciding where to open her up and begin searching. They need to decide fast and are very unsure. Shaun begins visualizing the path of the bullet in his mind. Melendez states that he is going to open up her entire torso in a desperate attempt to find the bleed. Right before they do this, Shaun yells, "STOP!" He believes he has found the bleed.

Claire has no choice, her patient is dying and Dr. Lim has not arrived; she grabs a scalpel from the suture tray and prepares to make an emergency incision. The extreme swelling is obscuring the patient's Adam's apple, and Claire is therefore unsure of where to place the incision.

Shaun explains where he thinks the bleeding is. Melendez decides to trust Shaun's instincts and listen to him. He makes the cut between the ribs Shaun indicated but doesn't see the bleed on left supreme intercostal artery where Shaun said it would be. Shaun tells him to look a bit higher, near the bifurcation. This is exactly where they find it; they clamp it off.

Claire works out where to cut and makes the call. Just as she finishes up Dr. Lim walks in, taken aback by the events she has walked in on but pleased it all went well. She asks for him to be taken to the OR where they can finish up and makes a point of telling Claire that this is why you watch the patient for the first 24 hours.

Our gunshot victim is stabilized and they look in the clear. Shaun turns to Kalu and admits that he was wrong. "You were right, Jared. Good work," he tells Kalu. Melendez tells Shaun that he made up for his mistake by his miraculous ability to locate the bleed.

Claire walks into the OR where Dr. Lim is performing and makes a public apology for her behavior earlier. Dr. Lim accepts Claire’s apology, and quips, "I know you needed this victory. I'm glad you saved a life today....too bad it was a Nazi!" Claire smiles and hastily leaves.

Everyone is in the clear and the road to recovery begins. Melendez informs the parents of the young girl on her condition just as she is waking up. She is greeted by her parents and her date takes this as his cue to leave. She turns to him and reveals that she thought he was trying to ditch her, that she even hoped that he was. The date looks somewhat relieved at the realization that it was no one’s fault this happened, that only the gunman is to blame. He then tells her that when she is better he would like a second chance at another date.

Shaun is finally home after another intense day when he gets a knock on the door.  It’s Lea, with an apple. She is still somewhat irritated at him, but admits that he shouldn't have to wear headphones in his own apartment and says that she will try to avoid bothering him again. He apologies for not taking her side earlier int he day, and explains that Claire had told him that he should support Lea's position, "even if it's wrong." Lea asks him not to lie to her and says, "You're the only honest guy I know." She gives Shaun the apple as a peace offering and heads back to her apartment.

However, Shaun is not done talking. After thinking for a moment, he heads to her apartment and knocks. Lea answers and Shaun says, "I made a mistake today...and someone got hurt." Lea looks at him compassionately and wordlessly embraces him. Although we know that Shaun does not like to be hugged, he doesn't seem so averse to this one; he doesn't hug her back, but he seems to relax into her embrace. 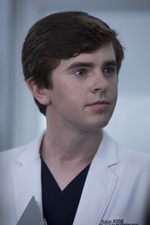 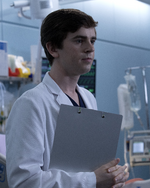 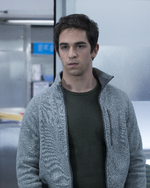 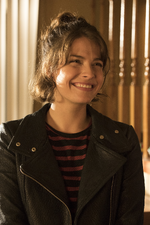 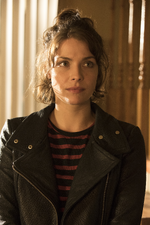 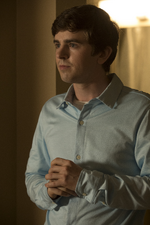 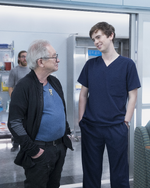 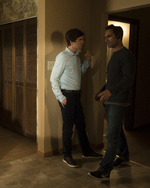 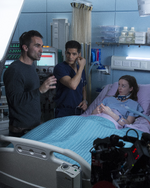