"We’re women, we’re not white, and we’re surgeons. Unicorns consider us a fabled species. We don’t get the luxury of public insecurity...We don’t need to be insecure, because every step of the way, we’ve had to be twice as good as everybody else."
—Dr. Lim to Claire on insecurity as women of color

"Claire"[3] is the third episode of Season 3 of The Good Doctor. It is the thirty-ninth episode overall, and aired on October 7, 2019.

Dr. Claire Browne faces complications at home and work as she prepares to lead her first surgery. Meanwhile, a sports fishing accident challenges the rest of the staff as they look to treat the fisherman’s injuries without damaging his prize catch.[4]

Claire practices what she'll tell her patient (about the surgery, after the surgery) as she goes about her morning routine. And it looks like it'll be the day she'll use that, since she and Shaun have a patient complaining of nausea and severe abdominal pain after eating. A laparoscopic cholecystectomy would be an ideal first surgery, Shaun says. Upon examining Michelle, it looks like they're right.

However, Neil points out it's not a straightforward case. The thickness of the wall poses a challenge, but Shaun proposes an open procedure would give them a clear view of the anatomy. Claire then watches Marcus perform the same surgery, and the other doctor quizzes her on the procedure and risks.

Claire practices what she'll tell Patricia on the way to see her, and Patricia's surprised how long Michelle's been sick. But then Michelle's chest starts hurting, and the doctors find a pulmonary embolism, part of a larger clot in her leg caused by her birth control pill. The surgery is put off a day.

Claire notices scars on her leg, and she knows they were self-inflicted, not from climbing a fence like Michelle claims. Her patient eventually opens up and admits it falls onto her to take care of the three foster kids her mother took in. But when Claire and Neil try to talk to Patricia, the woman insists their home life is fine.

Later, Claire admits to Audrey that she's nervous about the surgery, but the chief advises her never to say that again. "We're women, we're not white, and we're surgeons. Unicorns consider us a fabled species. We don't get the luxury of public insecurity," Audrey explains. "We don't need to be insecure because every step of the way we've had to be twice as good as everybody else."

But when Patricia refuses to listen to Michelle about her self-harming behavior, Claire suggests to the teenager that she talk to a therapist like she did — it helped her realize that it wasn't her fault her mother was sick. Patricia is upset and threatens to report her to the medical board, but Audrey defends Claire since she believed Michelle may be a danger to herself. However, Dr. Lim admits that not informing Patricia was inappropriate, so Claire's off the surgery.

Meanwhile Breeze continues living with Claire,who dumps out almost all of her alcohol and gives her routine drug tests.

The Mother and daughter duo even talk about Claire's patient at the hospital for a bit, which leads the conversation back to Claire's own childhood. Breeze wanted her to be having sex at a younger age because she thought Claire should've been having fun since she was always so restrained and serious. Claire takes offense to that, and explains, that she was that way because she didn't know when her mother would fall apart.

Claire's patient comes up during a session with Breeze's therapist, Dr. Donovan, and Claire admits that she's mad at Patricia for not taking care of her daughter. At that time, she's also off the surgery, and she admits to feeling relieved to have the weight off of her. Breeze understands because "things that matter are scary." It's how she feels about coming to therapy and talking about her life and their relationship. She worries she can't make up for all the times she let Claire down, but she thinks, "just be like Claire." "You're my inspiration," she tells her daughter, and Claire hugs her.

Shaun and Carly's relationship continues to progress since they went on another date, during which she answered all of his 83 questions. When Shaun tells Claire this, she suggests that some of those questions may have been a bit too personal this early on, Shaun ends up worrying since they didn't set another date or kiss goodnight.

Claire also keeps getting sidetracked by a Marlin, and the patient he's attached to. Shamus, the aforementioned patient tells the doctors that he has been chasing it for over 40 years and refuses to let them decapitate it to remove its bill from his leg and save him.

Morgan and Alex eventually convince Shamus to at least go in the MRI, but when he's finally there, metal explodes out of the Marlin. The fish falls off Shamus, and the man begins bleeding immediately. Claire puts her finger on his femoral artery and helps keep him alive until they can stop the bleeding in the OR.

Not long after, Claire realizes that the problems Morgan and Alex run into with Shamus are because he has cancer in his leg. They have to amputate his leg as a result, but Shamus is happy when his friends bring in his fish, mounted, because it saved his life.

Back to Michelle, she vehemently refuses to have the surgery unless Claire does it and even says she doesn't want to get better if they won't grant her request. Neil then goes to bat for Claire with Patricia, and Claire's first surgery is back on because of her commitment to Michelle.

While operating, Claire sees more scarring than the imaging suggested on the gallbladder, Neil has her talk through her approach. He also has her do the same thing when Michelle begins hemorrhaging later in the surgery. Both times, it seems to work, and the surgery is a success. Patricia subsequently asks for the psychiatrist's card after.

Claire and Carly talk, and Carly reveals that she didn't mind the questions Shaun asked.. She also knows it's not something Shaun would have worried about on his own, and Claire admits that she may have had something to do with it. Carly informs her that she and Shaun don't need anyone to run interference in their relationship. And as Claire is leaving the hospital, she sees Carly answering more of Shaun's questions.

However, not too long after, she gets a call from her mother's phone. She ends up at the scene of an accident, where her mother crashed into a telephone pole. And the voicemail Breeze left to he daughter telling her she had made dinner for them to celebrate and was going to borrow the car to get dessert. All while in the present, Claire stares at her mother's dead body and eventually sees the champagne bottle Claire was saving; now open, on the floor of the car. 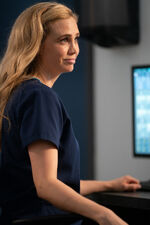 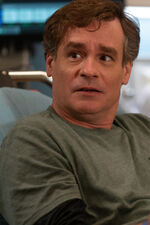 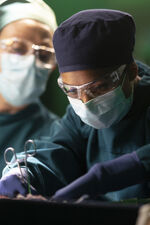 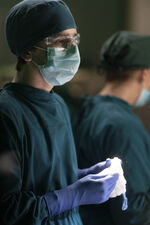 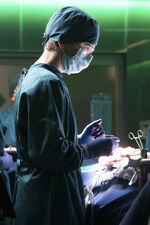 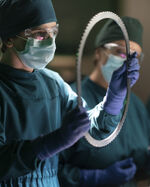 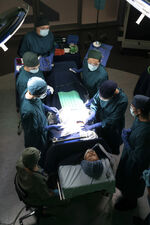 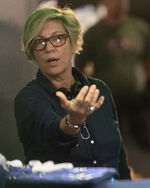 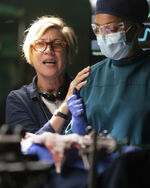