"We don’t work alone, Marcus. Every time we have a good outcome, it’s because everyone in the room did something right. Shaun came up with the idea, Park got it out of him, I approved the surgery, and you? The only reason Shaun is working here is because you believed in him."
—Dr. Lim to Dr. Andrews on teamwork after stepping in to do Shaun’s surgery

"First Case, Second Base"[1] is the fifth episode of Season 3 of The Good Doctor. It is the forty-first episode overall, and aired on October 21, 2019.

Dr. Shaun Murphy has been assigned his first surgery by Dr. Audrey Lim. However, Dr. Marcus Andrews questions whether he is really ready. Meanwhile as Dr. Claire Browne continues to avoid her complicated emotions about her mother, she and Dr. Morgan Reznick have a patient whose diagnosis has them doubting his story.[3]

Carly and Shaun are watching a movie and kiss for a bit, but then Shaun stops and unpauses the movie they’re watching. Carly says they could just keep on kissing right now, as opposed to every 12 minutes, but Shaun refuses saying they should stick to the schedule. Otherwise, they will never see the end of the film.

At breakfast the next morning, Lea tells Shaun she didn’t hear him come in last time. He then finds out he will be having his first lead surgery. Lea is very excited for Shaun, and congratulates him before he leaves the apartment to get to work.

At San Jose St. Bonaventure Hospital, Claire thanks Morgan about being there for her regarding her mom, but asks that things stay between them for now. She explains that she’s not ready for everyone to know about what happened to her mom. Morgan agrees, but tells Claire that eventually, she's going to need to move past denial on the stages of grief.

Later, Dr. Andrews meets with Dr. Lim and mentions how Shaun’s patient was previously Dr. Park’s before she stepped in. She explains that Shaun’s weakness is patient management, so having a genial patient will be great for him. Dr. Andrews thinks she shouldn’t be coddling him. Dr. Lim counters that by saying that if they challenge Shaun too much, they run the risk of losing him. Dr. Andrews follows that comment by saying that Dr. Murphy perseveres and is annoyingly resilient. Dr. Lim says she agrees that some failures don’t seem to faze him at all. Instead, she says she will tough love Dr. Murphy’s ass next week.

Meanwhile, Debbie is moving into Glassman’s home, and at first he finds a softball among her things. He asks her if she played softball. She says that during her junior year in high school, she had an ERA of 2.95. Eventually, Aaron comes across Debbie’s Walther PPK.32 which she named Wally. She asks if it’s going to be a problem because she keeps it by her bedside table or in her gun safe. She even tells Aaron that the combination for it is 7359. Debbie goes onto tell him, that if they’re going to live together,they will each need to make some compromises.

While doing some tests on his patient, Alex asks Shaun if he’s nervous, but he says he’s not freaking out. Shaun even points to the surgeries he has assisted and had good outcomes to prove his point. Alex points out however, that based on statistics, Shaun is due for a blow up. He apologizes shortly thereafter saying he had his hands on this case first, but now he will be third out of fourth at best. Alex says he’s happy for Shaun though. Once the scan is complete, Shaun realizes that his patient will need a feeding tube permanently even if the surgery is successful.

Later, Shaun and Alex sit with Dr. Lim and Dr. Andrews discussing the scan results. Dr. Murphy asks Dr. Park if he can tell the patient the news since he’s bad at talking with patients in that manner. Dr. Andrews says that if he can’t take the risk of telling the patient, and her deciding she doesn’t want him to do her surgery, then he should hand it over to Dr. Park instead. Dr. Lim intervenes and says Dr. Park will tell Beth, but that this will still be Shaun’s surgery. However, once the three doctors go talk to Beth, Dr. Andrews has Dr. Murphy tells Beth the news instead. Eventually, Shaun tells Beth that because they can’t move her stomach up, she will need a feeding tube after all for the rest of her life.

At the hospital’s cafeteria, Dr. Glassman comes to the table where Shaun, Claire, Morgan and Alex are sitting and asks if any of them own a gun. Alex answers by saying he still has his service pistol, and Morgan says she has a Sig P365. Dr. Glassman then asks Alex and Morgan if they have ever had issues about owning a gun with their significant others. Alex says that after their son was born, his wife suddenly hated having a firearm in the house. Then one night, he came home to a Powerpoint presentation with some terrifying statistics. So now he keeps it a locker in a gun range he frequents. Morgan, for her part says she had a boyfriend who felt very weird about her owning a gun. She explains that he wasn’t big on logic, so instead she took the emotional approach. Claire reveals she lived with a guy that had a gun, and she had to resort to the nuclear option; either the gun goes or he does.

While practicing for his upcoming surgery with Dr. Andrews there, Dr. Lim comes in and tells Shaun that Beth wants him off her case. Shaun gets upset and walks out. Dr. Lim finds Shaun sitting on a bench outside the hospital shortly thereafter.

The next day, Carly comes to wish Shaun good luck on his surgery and gives him a kiss. Carly then lets Shaun get to second base with her by letting him touch her breasts.

Meanwhile, with Morgan and Claire’s patient, he is still claiming he wasn’t drinking. They run various tests, but at each turn, it just further point to him drinking and that he has likely been off the wagon for a while. The wife refuses to listen, and continues to blindly believe in her husband. They eventually find out that the bleeding is not coming from an ulcer, but a tumor. Shortly after this discovery, Dr. Morgan pages Dr. Melendez to the OR.

In the operating room, Shaun wears Dr. Glassman’s orange surgical cap for good luck, and begins to operate on his patient. Shaun ends up freaking out midway through the operation, and walks out. Dr. Andrews has Dr. Park page Dr. Lim.

Dr. Lim then tells Dr. Park to take over the surgery, but he refuses, saying he doesn’t think Shaun lost it. He explains that minutes earlier, he was in complete control of the operating room. By explaining what he’s seeing the other doctors figure out that Shaun has found a way for Beth, his patient to not need a feeding tube. However, the procedure is too complex for him to lead. Which means he can only walk them through the process. Dr. Lim gives Shaun the final stitch saying it’s completely symbolic, but symbols can be powerful. As he does it, he imagines seen his brother cheering him on.

Back with Morgan and Claire, Dr. Melendez has successfully removed the tumor, and it’s being sent to pathology for analysis. Dr. Reznick notices a strong odor of alcohol from the patient's insides. Later, when their patient wakes up, they tell him and his wife that he has what is called Auto-Brewery syndrome. The tumor they found was blocking his intestinal tract, preventing carbs from being digested. Instead, the trapped carbs fermented into alcohol, making him appear drunk. With the removal of the benign tumor, he is now all good, and along with it his arrhythmias gone too. Claire explains to Curtis, that Teal’s faith in her husband was what actually saved his life.

After surgery, Alex tells Shaun he was initially so pissed at Lim for kicking him out, but it turned out for the best. Dr. Semler had an appendectomy waiting for him, so in the end he got his first lead after all. Shaun tells him he’s very happy for him.

Back at home, Aaron takes out Debbie’s gun and loads it while she takes a shower. When she gets out, she says they need to talk. But Aaron says he is working on his compromising skills.

Later that night, Shaun goes to Carly’s home asking her if he can check her other breast. 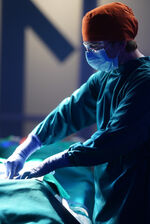 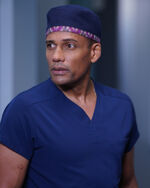 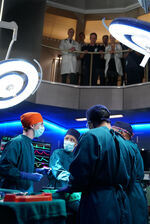 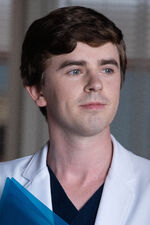 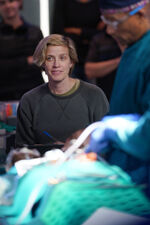