In the conclusion of the two-part season premiere of ABC’s “The Good Doctor,” Dr. Shaun Murphy and Dr. Marcus Andrews determine that their patient has been infected with COVID-19. As they struggle to understand and get ahead of a constantly evolving virus, Shaun has a hard time balancing his fears and concerns about potentially jeopardizing Lea’s health and wanting to be with the woman he loves. Meanwhile, Claire looks for a way to grieve Melendez’s death through her patients. In the COVID-19 ward, Dr. Morgan Reznick softens a little while tending to Nurse Petringa (Karin Konoval), who imparts a bit of wisdom from her 40+ year nursing career. Elsewhere, Dr. Alex Park and Mia (Jennifer Birmingham Lee) discuss their future together.[2]

State of Emergency Week Eight Some time later, Morgan is back at San Jose St. Bonaventure Hospital reporting for work after getting tested twice for COVID-19. She and Nurse Deena Petringa had previously been exposed to COVID-19 due to a patient they admitted, and who unknowingly tested positive for the disease. Nurse Petringa reports to the hospital after she tells Nurse Dalisay Villanueva that she woke up with a temperature of 104 and needs heated, humidified oxygen she can use at home. Nurse Deena Petringa jokes that Morgan was always the overachiever. Unfortunately, their moment gets cut short when Nurse Dalisay reports to Morgan that Nurse Deena’s pulse ox is 90. Which in turn means that they have to admit her into the hospital. Deena’s son asks Morgan if his mom is going to be alright, and Morgan hesitates to answer.

Claire for her part continues to hallucinate Neil Melendez who tells Claire that is all meaningless stuff when she looks through the belongings of the deceased Covid patients the hospital has had. Claire disagrees and says that each of those items tells an interrupted story. A voicemail that will never be heard, a shopping list for a home-cooked meal that’ll never be made.

Shaun and Marcus’ patient has a blood clot that is interfering with the equipment they are placing on him. Alex continues talking with his patient who is on ventilator and undergoing an experimental treatment. Whereas, Aaron is awake at three in the morning playing video games. One of the people he is playing with turns out to be a fifteen year old, who tells Aaron he needs to apologize to Debbie Wexler.

Back at the hospital, Deena’s oxygen levels continue to decline. They joke about the people out on the streets protesting to get the state opened back up when there are still people dying of Covid. Deena then begins to cough, while Audrey gets an alert and has to leave the nurse’s room. Meanwhile, Claire has no luck finding out more info on the guy whose dog tags she found. The hallucination of Neil tells her that it’s not healthy to get fixated on dead people. A frustrated Shawn then comes in and confides in Claire that Lea is not answering her phone despite not being an essential worker.

One after the other, Audrey turns the machines off several Covid patients after their loved ones say their goodbyes to them. Each time taking a mental toll on her. Till one day she is just sitting down in bed motionless as the sun comes up.

Alex and Shaun are sitting down drinking coffee, while Shaun asks Alex what he loves about Mia. After that conversation, Alex realizes that he isn’t necessarily still in love with Mia, but rather he loves their son Kellan Park.

Shaun hangs up on Lea after she admits that she had a sore throat and got tested for COVID, but it turned out negative.

Morgan checks in on Deena, who tells the doctor that there are a lot of different approaches to “nice”. Otherwise she would not have lasted forty years as a nurse. She tells Morgan that she will have her own form of nice.

Alex tells Kellan that unfortunately he doesn’t think he will make it down to Phoenix to his graduation. Frustrated, Kellan hangs up on his dad.

Meanwhile the wife of Shaun and Marcus’ patients calls the two doctors useless after they tell her yet another way her husband might die. Equally frustrated, Shaun tells the wife that their patient never left the apartment. So if she wants to blame someone, she should blame herself since she was the one leaving the apartment. Afterwards, Marcus chastises Shaun for his bad bedside manners and tells him that everyone is going through crap. But that is no reason to lash out at a patient’s loved one.

Audrey and Deena have a talk, reminiscing how one doctor in particular whom they nicknamed Pitstain was always on Audrey’s case. She was one of two women, and the only person of color. But at one point Deena stepped in when Audrey was on the verge of crying in front of the aforementioned doctor. Which gave her enough time to compose herself. She asks Deena to give her enough time to nurse her back to health.

At his home, Aaron apologizes to Debbie for everything but it does downhill fast, when Debbie catches onto him not being sincere. Later, Aaron is about to eat a sandwich when he notices Shaun is about to throw a rock at his window. Shaun admits that he wants the pandemic to be over. Aaron’s advice is to be kind to himself and to others.

Back at the hospital, Deena’s numbers continue to fall, and Morgan explains that she needs to go on a ventilator. She opens the door to Deena’s room, and hikes up the blinds on the window to reveal that there are many doctors there showing her how much she meant to them. She is then put on a ventilator.

Kellan apologizes to his dad for getting angry at him, and admits that he wants to know that he is more important to him than his job. In turn, Alex admits to loving his son very much.

Neil’s hallucination tells Claire that it has to hurt for her to heal. That unlike when mom died, Claire isn’t running away.

Sadly, Deena dies as a result of Covid-19, and both Morgan and Audrey are there as the ventilator machine is turned off. They have Deena’s son on a video call, who tearfully tells his mom he loves her as he says goodbye.

Three weeks later Martin has gotten better and is escorted out to the applause of the doctors and nurses. Neil’s hallucination acknowledged that his and Claire’s story had been cut short. He also assured her that her own amazing story was still ahead of her.

Shaun and Lea were reunited after Lea arrived at Shaun’s place with three consecutive negative COVID tests; Park and Mia decided it was in their best interests not to reconcile; and Glassman and Debbie made peace after quarantine nearly drove a permanent wedge between them.

At night, Claire asks Audrey if she is okay if they stopped coming to the bench. She admits that Neil changed her, and that is not going away. 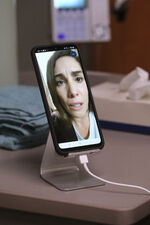 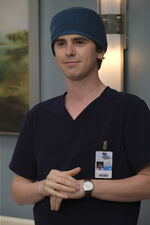 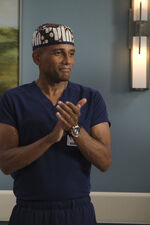 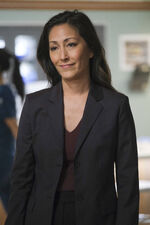