In part one of the two-part season premiere of ABC’s “The Good Doctor,” Dr. Shaun Murphy treats a patient with an illness that is not only unpredictable in nature, but also unlike anything he or the team at San Jose St. Bonaventure has ever seen before. As safety protocols and quarantines increase due to the global pandemic, Lea and Shaun’s new relationship will become tested; and Dr. Alex Park gets ready to move back to Phoenix, Arizona, to be closer to his family. Meanwhile, Dr. Morgan Reznick navigates her way around the clinic following her departure from the surgery team and unknowingly puts herself and several members of the staff in danger. Finally, Dr. Claire Brown continues to work through her grief, still reeling from the sudden death of Dr. Neil Melendez.[2]

At a coffee shop in San Jose, California, a woman coughs shortly before handing the cashier her the money owed for her drink. She then deposits some of the leftover change into the tip jar and leaves.

Whereas Shawn is already awake and pouring himself some orange juice to start his day. There is a knock on the door and Shawn goes quickly to open it. Lea barges in and asks Shawn if he has seen her badge. She says that she had last night, but thinks that maybe it fell out of her bag when she paid for pizza. Shawn reminds her that this wouldn’t be happening if she just stayed over. Lea however counter that by saying that even when they lived together, she still had an affinity for misplacing her things. While looking for her ID badge, Lea tells Shawn that it is simply too soon for her to move back in. She jokes that if she had stayed over the two of them would have not slept as much as they did apart. She eventually finds her badge in between two cushions of Shawn’s sofa, and agrees to staying over on Saturday.

Elsewhere, Claire and Audrey are sitting on a bench as they continue to mourn Neil’s death. Claire confides in Audrey by telling her that she hopes they don’t stop coming. Perplexed, Audrey asks why they would stop coming. Claire answers that it’s usually how it works, people mourn for a while and then they forget. Audrey sighs and tells Claire that it’s not forgetting, but rather people begin to move on. In that moment, Claire vows to never stop coming nor forgetting about Neil.

At San Jose St. Bonaventure Hospital, Morgan takes the temperature of the woman who had been at the coffee shop and the thermometer says that the woman's temperature is at 101°F. When Morgan asks if she is presenting any other symptoms, the woman in a hoarse voice states that at first it was a sore throat, then her body started aching and now she has a really bad cough. The woman explains that she had her flu shot, and Morgan states that unfortunately Influenza is always mutating, but she hopes that woman will recover fast. The woman then mentions how her daughter is worried she might have the coronavirus. Morgan in turn asks her if she has been to China, on a cruise or been in contact with someone who was in China. When the woman says she has not, Morgan tells her that having a sore throat is not one of the symptoms of the coronavirus. As a result, she sends the woman home and tells her that it is just a bad case of the flu. So she should go home and rest and drink plenty of fluids.

Two weeks later, the same woman is back in the hospital now in worse condition, and Dr. Lim tells the woman’s daughter that the virus has damaged her mother’s lungs. Moreover, her blood oxygen levels continue to drop as her lungs work harder and harder to breathe.

At another part of the hospital, Shawn tells another patient that he has Covid-19. The male patient reminds him that he hasn’t been tested. But Shawn states that the patient’s chest x-rays suggest ground glass opacities. He then goes on to say that the hospital currently has no Covid-19 tests. The man then tells Shawn how he can’t smell, and that he has been reading about the virus, and that is not a symptom. The male patient asks him what happens now. Shawn in turn replies that there is no treatment, and he should just go home. But to come back if he has trouble breathing.

Meanwhile, a frustrated Dr. Lim is on the phone with the county health department trying to get more tests available at the hospital.

Morgan and Alex work on a pregnant woman who tells them that she has been experiencing some of the symptoms. Worried, she asks them if she is infected, if her baby is too. Dr. Park replies that from what they know so far about the coronavirus, it does not seem to affect children in the same way as adults. He asks Morgan if they should admit her, but she sighs and says that she is probably safer at home. Alex gets a call from Mia and he informs her that he won’t be making it out to Phoenix anytime soon. Mia reminds him that there are hospitals in Phoenix too, but Alex reminds her that it would not be practical to share a living space with them after working in a hospital for 12 hours with Covid-19 patients. Mia brings up how how Kellan will be really upset because he was looking forward to Alex being closer to them. Alex then mentions how the pandemic will be over by June, just in time for Kellan’s graduation.

Audrey meanwhile finds herself at a conference through Zoom and asks if anyone has any connections. Jessica Preston reminds Dr. Lim that everyone has connections, but right now all of them are getting nowhere. Debbie interrupts the meeting with the board Dr. Glassman is on by asking him if he wants nuts or no nuts on his banana bread. He instead vents his frustration with his wife, by telling him how he’d rather be working at the hospital because working from home is making him feel useless. Debbie reminds him that he is 65 years old and with a history of cancer, so working on the frontlines of the hospital is not what is best for his health.

It is now week three of California’s State of Emergency, and Alex wakes up to his phone ringing. Alex picks up and it turns out to be his son facetiming him. Alex goes out into the kitchen and Shaun hands over some orange juice while he talks with Lea. Kellan recites the number of deaths thus far from Santa Clara County, and asks his father if he has been tested for it. Alex, remains blasé and tells him he is not presenting any symptoms. Kellan reminds him that people can have Covid and still be asymptomatic.

Later that night, Alex, Morgan, Claire and Shaun all are in the break room. A stressed out Claire mentions how she feels terrible right now. That they have just spent 18 hours watching people get sicker and sicker. Not helping anyone, but rather postponing death a while longer. Marcus arrives home, but stays in the garage to keep his wife as safe as possible.

Week four of the state of emergency, a tired Aubrey is stopped from getting on the elevator, when an older woman asks if she is a hospital worker. When Aubrey says that she is, the woman asks for her to take the next one. Alex and Shaun but heads when he begins to fill up what would now be Lea’s cabinet.

As time goes on, the global pandemic begins to take its toll on everyone: Shaun struggles with being so far from Lea, Glassman becomes overprotective of Debbie to the point of annoying her. Whereas Lim begins losing her temper when she gets asked to take the next elevator by a blonde woman repeatedly. Eventually, Lim just gets on the elevator and tells the stranger to wear her damn mask. Ultimately, Shaun and Lea spend time with each other by having a door between them. Glassman decides to sleep in the same room as Debbie.

In the end, Claire's patient dies while Park delivers the baby of his own COVID patient while she is in a coma and Shaun and Andrews' patient goes on a ventilator. Park decides to take responsibility for putting his patient through an intensive treatment. Unfortunately, while treating a man with symptoms of diverticulitis, Morgan discovers that he has COVID and both she and Nurse Deena Petringa have been exposed. While looking at the personal belongings of the hospital's COVID patients, Claire sees Melendez. He tells her that things will be okay. 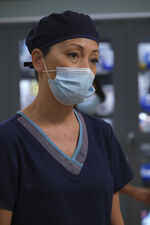 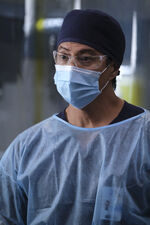 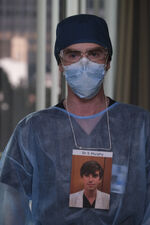 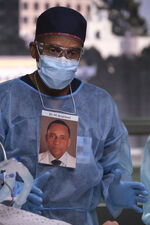 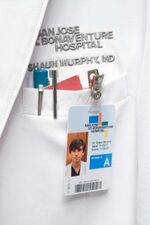 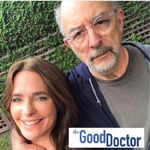 Melendez Has Comforting Words for Claire - The Good Doctor