"Sacrifice"
"Intangibles" is the ninth episode of Season 1 of The Good Doctor. The episode aired on November 27, 2017.

As part of St. Bonaventure Hospital’s international humanitarian program, the team takes on the case of a young boy from the Congo who has severe congenital heart anomalies. Dr. Neil Melendez has doubts about the safety of the procedure, while Dr. Shaun Murphy works out the best course of action. Meanwhile, Murphy’s latest encounter with his neighbor Lea has him confused.[2]

The episode begins with Lea Dilallo witnessing a woman leaving Shaun Murphy's apartment, he shares that he is interviewing for a housekeeper, but he isn't hiring her because he clothes don't match; Lea looks at her clothes and calls him an "asshat" grabbing his arm and leaving him confused. At St. Bonaventure, Allegra Aoki is holding a press conference, as their international humanitarian program comes to fruition. She introduces Dr. Neil Melendez and Dr. Avi Mehta, who after screening hundreds of candidates have ultimately decided on an inspiring young boy named Gabriel from the Republic of Congo with severe heart abnormalities. At the reception, both Melendez and Mehta feel Aoki should have stuck with the list of candidates they selected but she tells Melendez there were several intangibles that made her choose off the list. When he meets the candidate he understands that cuteness was one of them. Melendez reminds her the cuteness and sob story would work on donors but not the medical results and certainly not on him; Dr. Mejta disagrees. She asks Melendez to do his own work up before he mistakes his final decision.

Dr. Marcus Andrews and his wife Dr. Isabel Barnes come to see a patient named Elisabeth McLaren who is a podcast host, they are hoping everything will come back benign and will be another great episode to talk about. Dr. Claire Browne jokes along with them when Elizabeth the patient comments on how they work together like ping and pong; Claire jokes most married couples who work together are like Miss and Match. Dr. Melendez and the intern team come to see Gabriel, as Melendez is examining him, Mehta says "he really needs our help". Nothing is said again until they are in the hallway and Melendez says it sounds like he has a blow dryer in his chest. Melendez I sure cannot repair the hear but Mehta doesn't know until they do all the tests and refuses to give up. Shaun meets with Dr. Aaron Glassman who is upset that Shaun turned away a housekeeper whose clothes didn't match; Shaun confronts him on doing this because he didn't respond well to a man with a gun robbing a store. Shaun walks away, saying he is happy and doesn't think he could be more. He walks in with the machine for Gabriel, telling Claire about his neighbor Lea. He tells her that Lea doesn't like him because she called him an "asshat" while touching him; Claire says Lea was flirting with him; because when flirting some people say the opposite of what they mean. She gives him tips to look for is she's flirting.

Both Andrews are enjoying their dinner when they receive a call that Elizabeth's specimen has been misplaced but he assures her that they will wind it. In the Pathology Lab, Claire has told that everyone is so quick to blame the lab as it might not have even made it to the cart on the way, even though Claire seen it placed in the specimen bottle, she's advised to check back with surgery. Shaun is with Melendez when Mehta apologizes for further testing when he admits he has never seen so many anomalies in one heart; they suggest a medication that could give him a couple of years of life. Melendez plans to break the news to the mother and asks Mehta to tell Aoki. Melendez arrives at Gabriel's room, his mother playing a drum that she taps at a heartbeat that reminds his hear to beat until the doctors are able to fix it. Melendez informs her, they have done all their tests and all knows is that her son has a heart he cannot fix. She says they wouldn't have come so far with a hear she didn't think he could fix. Claire searches every single sample and cannot find Elizabeth's sample. Andrews and Jessica Preston tell her she can feel sorry but cannot use the words "sorry" nor "mistake". Jessica informs Elizabeth that they cannot find her specimen and says she will be damned if she has to have her voice box removed because someone screwed up.

Shaun confronts Dr. Glassman about him not being stupid. He talks about flirting. Shaun says he likes to be alone but Aaron says being alone and being lonely are two different things; the conversation gets switched around and now Shaun learns that Aaron is lonely and he encourages him to know the trifecta of flirting. Claire and Dr. Carly Lever hunt around the hospital for Elizabeth's specimen and with a little prodding, he reveals he did stop at the cafeteria for a little while. Dr. Jared Kalu is packing up Gabriel's things and finds his mother in the bathroom, watching the toilet as she repeatedly flushes the toilet. She comments on how much water there is and always more. Gabriel's vitals drop and Jared calls for help as she begins to tap her drum. Shaun comes to see Gabriel, Dr. Mehta calls for blood work every 15 minutes but Shaun has an idea and chases after him with the toy Mr. Potato Head. Meanwhile, Claire and Carly go to the cafeteria, where Gwen brings them the bio-hazard bag. Shaun comes up to Melendez and begins to explain things but he tells him to stop and follow him. In the cafeteria's lost and found bin.

Shaun explains to Aoki the procedure that could save Gabriel's life; Melendez says it was a terrible idea and won't work but since she was keen on making terrible decisions for him, he felt she should know. Shaun asks him if fear of failure a good reason not to do this; Melendez says that he isn't sending him home in a box. Elizabeth continues to argue with Claire, but when she apologizes, Elizabeth hugs her and she thanks her for that. Andrews says "good for you" and won't reveal that she broke the rules but suggests she finds those samples. Melendez goes to speak to the mother, confirming that he hasn't been taking his medication. She reveals she's been keeping them because if he starts getting better, they will send him back to the dangerous village they live in. She says he will never understand, that their greatest want is hope. Melendez gives in and agrees to do whatever they can. Andrews and his wife are enjoying dinner, talking about Elizabeth. He feels he did the surgery correctly, anything after that isn't his fault not his problem. She wants him to feel horrible because it is the only thing that will make him change back onto the man she married. She is angry that he's going after the President of the hospital would leaver he far out of his life, and begins to read text messages from him about not coming home for dinner or for her "not to wait up".

Claire has drawn in the whiteboard, the trips of each specimen and where they all go. Shaun comes in and shows a chart of his own about all the flirting he has noticed in the hospital. Melendez interrupt them, asking Shaun to elaborate on his idea for Gabriel's surgery; together, they are in the OR working with a 3D image of Gabriel's heart and attempt to do a practice surgery. Claire talks to Carly, saying her goal was to be the best surgeon in history but her new goal is to not get washed out of the residency program. Dr. Andrews comes to join Claire, saying this team is a problem and should be a team solution, joining in on the search. Jessica approaches Claire and reprimands her for telling Elizabeth she was sorry and hopes they don't see the price tag on that and tells her they are out of time to save the specimen. Melendez and Shaun continue to work on the 3D heart; they succeed. Shaun wished him good luck but admits he doesn't believe in it. The team comes to see Elizabeth, informing her that they don't know if she has cancer or not. The options are having surgery she may not need, or leaving her without speech or do nothing and die.

Gabriel's mother and Jared lift Gabriel onto the surgical gurney and brings him up to the OR to begin. Elizabeth sits in her room as she reads little children's books for her children as Claire looks on. Melendez asks Shaun how everything looks with Gabriel's heart; he says its 14mm and it's perfect, but suddenly he doesn't think there is enough for outflow. Shaun reminds him on the model at 13mm and the model died; Melendez makes his call. Claire stops Elizabeth for surgery, as she suddenly realizes there could have been a mismatched name on the label, begging Andrews for a little more time. Shaun tells Melendez he is at 13mm. Jared sees a reattachment piece and they find something they can work with inside Gabriel's heart. Claire works with Carly, again, hoping to find the specimen. Melendez suggests taking Gabriel after bypass after 6 hours and 48 minutes. The team watches Gabriel's heart and monitors closely, after 12 seconds there is no action. Jared says he has been on nearly 2 hours too long but Melendez insists they wait. Shaun is told to do the closing as Melendez goes to see Gabriel's mother, who is still tapping on the drum. He takes her hand and informs her that his heart is beating just fine on its own.

Elizabeth wakes up and Claire comes to see her, she informs her that the specimen was saved in a solution that was meant for a bullet and it was fresh as a daisy. Dr. Andrews informs her that she doesn't have cancer. She hugs Claire and thanks her. Aoki watches as Jared and Melendez watch cartoons with Gabriel and his mother. She calls "intangibles" out to Melendez before she walks away. Shaun comes to see Aaron, saying he had a big day. Aaron praises him for learning something new today but when he finds a life coach he will learn faster. Shaun doesn't want a stranger helping him, asking if Aaron is giving up on him. Aaron admits he can't always be there. Shaun reaffirms he doesn't want a stranger helping him and walks out. Claire congratulates Melendez outside waiting for Jessica. Jessica joins Melendez and gives Claire the court papers from Elizabeth and her lawyers. Lea and Shaun get off the elevator and he tells her she looks absurd in that sweater. She tells him she has apples and offers him one. She unlocks her apartment and he follows. 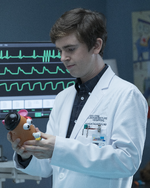 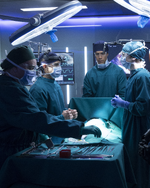 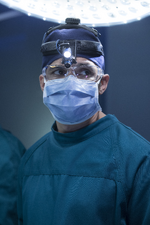 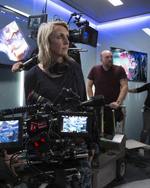