"Point Three Percent"
"Pipes" is the fourth episode of Season 1 of The Good Doctor. The episode aired on October 16, 2017.

Dr. Neil Melendez and the team have to wade through legal waters when a husband and wife have to make a life-changing decision about their unborn child. Meanwhile, Dr. Shaun Murphy struggles to adjust to his new environment at home and makes a huge step forward with his colleagues.[2]

The episode begins with Dr. Shaun Murphy laying on his mattress in the middle of the room, struggling while listening to the water dripping from the faucet. He searches everywhere in the house, frantic; he calls Dr. Aaron Glassman over in the middle of the night, saying they will have to find it. Shaun shows him the list he made and the star screwdriver is on it. Aaron tells him there is a hardware store up the street but Shaun wants his own, when he panics, Aaron yells at him but quickly apologizes. Aaron finds the screwdriver acknowledging that Shaun is overwhelmed and stressed. He reminds him to call the superintendent to fix things and tells Shaun to go back to bed. At the hospital, Dr. Neil Melendez shares with Dr. Jared Kalu and Dr. Claire Browne are talking about a woman who is 26 weeks pregnant after 3 miscarriages. Shaun runs in saying she needs an ultrasound and an MRI to measure the tumor's growth rate. Melendez questions how Shaun is showing up tired after having 12 hours off; Claire defends him which irks Melendez.

During the ultrasound, they discover the tumor is half the size of the fetus; Melendez informs the parents that the safest course is to terminate the pregnancy; the parents say they want to do whatever it takes to save the baby, asking about fetal surgery. He informs her of the dangers to her because of her own condition and could have fetal consequences. The couple talks about it, with the husband saying they could try again for a baby; but Shaun says they can use other medications to save the mother too. Out of the room, Melendez orders Shaun to never contradict him in front of the patient again; Shaun says they are not in front of the patient now. Claire also chimes in and Melendez tells them to get her prepped. Dr. Marcus Andrews is covering the ER for Dr. Audrey Lim and needs someone to lance a boil; he sends down Claire and Shaun but not before Claire protests saying it was their idea that convinced him to do the surgery and now he is punishing them for that. Melendez says he is only punishing Shaun for being late and she needs to go with him because she defended him.

When they get to the ER, they learn her "boil" is on her labia, but Claire wants to take a look. The patient is experiencing pain which isn't normal for a boil and Shaun suggest she could have flesh-eating bacteria. Melendez speaks to Andrews about the surgery on his pregnant patient, and after questioning if his judgement is clouded, Andrews agrees. Claire is examining Oliva Hartman, the patient explaining the abscess is probably from an untreated chlamydia infection. Shaun begins to visualize everything as she shrieks in pain. Shaun tells her to go on a more upward angle and he offers to try. Claire tells her there is nothing to be embarrassed about as Shaun says 25% of college students contract and STD before graduation. She says she gets tested for STDs every 30 days, giving the nurse pause. She reveals she gets the test every 30 days because she does porn. Melendez talks to his whole team, about how vitally important this surgery is but is interrupted when Jessica Preston calls him out of the OR. He meets with the father who says he doesn't want to do. Melendez tells him that he doesn't have a veto over his wife's medical condition; Jessica informs Melendez that a husband cannot stop him from operating on his wife but he can stop him from operating on his baby.

On the bus, Shaun notices all the ads with women dressed in lingerie and remembers when he found his brother looks at a "Peepers" magazine. Shaun stands up, yelling that he missed his stop; the driver lets him off, Shaun unwraps the plastic scalpel his brother gave him as he stands in terror and confusion at the side of the road. Lea Dilallo stops her car, noticing Shaun, she drives them home, telling him she is horrible with directions too. She is talking about the guy, and Shaun blurts out she stinks. She looks at him sating he is funny opposite as must guys by saying what is exactly on his mind and it's nice. She says goodnight to him and tells him not to fix any faucets as it's the super's job. Shaun bags on apartment 23, the super is furious for waking him up in the middle of the night but takes the list. The following morning, Aaron says it's his fault for Shaun taking what he said literally. He retracts and says Shaun is smart and needs to make sense of what people say, and navigate how things are to go. He mentions a Personal Support Worker, but is furious and yells he doesn't needs an aid. Aaron says they will have to talk about it another time and for them to enjoy their breakfast. Mark talks to Dr. Melendez, knowing why his wife is desperate for the surgery but wants to know why the doctor is. Melendez wants to know what happens if she lives, he says he isn't desperate, he is confident, which should make him feel better; Mark walks away.

Dr. Andrews praises Shaun for his work with the pelvis exam, begins to realize he doesn't like being squeezed. He asks if Shaun has ever had a girlfriend, Shaun wants to know if he is encouraging him or mocking him. Andrews says he wants to know when is the right time for either and Shaun is curious to know when it’s a good time to mock him. They see how bad it is for the patient when the swelling isn’t going down because there was a mass behind the abscess and surrounding the nerve. Shaun and Claire come to see their patient, revealing they were able to drain the abscess but there is a fibroid tumor that isn’t cancerous but is wrapped around the nerve; they have to remove the tumor but that means it will sever all feeling in her genitals. She feels God is punishing her, when Shaun asks if she is religious she says she used to be but hasn’t thought about God in a really long time. Claire offers to call her parents because that’s what they are for – to support their kids. She asks Claire if she could tell her father she was a whore? Claire says it’s only a mistake, nothing more.

Dr. Melendez begins the surgery when his whole surgical team says they are ready; just as he cuts into the uterus her heart drops. Surgery immediately stops and Melendez informs the mother that she formed a blood clot in her heart but her baby is stable. She feels they are right back where they started. Melendez says she just had a heart attack and now they don’t have an option, they need to terminate the pregnancy because the clots will overwhelm her heart and brain. Her husband Mark, says they need to try again.The board meets again, Andrews says Melendez is at fault because had he not offered hope they wouldn’t be in this position. Jared comes to see the patient who says her heart feels fine and the incision pain is only a 5/10. Melendez tells the board they could put her under for surgery and then remove the baby and say it was something that happened during surgery; Jessica and Andrews tell him they are pretending they didn’t hear that. They want him to do the surgery again; Jared interrupts with an idea, saying what if they kill her before she kills herself.Melendez and Jared explain that they can stop her heart, it doesn’t eliminate every risk but it does reduce the biggest one. She thanks them, as they prepare for surgery in the morning.

Shaun returns home and notices his faucet isn’t leaking anymore. He knocks on the superintendent’s door, late at night, and tells him he fixed the sink, but it wasn’t on the list and he wasn’t supposed to touch it. He is confused as Shaun explains he fixed it himself already, it has to drip at a certain rate and it’s not fair that he has to do it again; the superintendent tells him if he doesn’t like it, to move and if he knocks at his door after 5 pm again he will knock his teeth out. Melendez and Jared both work overnight on a plan for the surgery as Shaun, who also cannot sleep visualizes the pipes in his apartment. In the morning, Melendez watches as Mark kisses his wife and they wheel her off to the OR. Claire and Andrews come to see their patient for her surgery to sever the nerves in her genital area; Shaun comes rushing in saying how they can connect the nerves, asking if she prefer to lose nerve feeling in her thigh or genitals and Andrews thinks it can work. They do the surgery and congratulates both Shaun and Claire with good work. He says although Melendez doesn’t say it enough they are both doing a great job and if either of them needs anything, his door is always open. In the other OR, Jared flushes the heart as soon as her heart is topped, they prep her for a c-section.

Dr. Andrews says surgery is a success but when she says she can’t feel anything, Shaun interjects saying it will take 6 months to a year for her to regain sensation, Claire says she is going to be fine; she asks Claire for a favor, asking her to call her parents. Meanwhile, Dr. Aaron Glassman is in his office and does some research on an Autism Support Chain. In the OR, Jared is mesmerized by the tiny fetus, Melendez removes the tumor and as he is putting the fetus back, he calls it a “Baby”, which Jared takes note of. Melendez ruins the surprise and calls the baby a boy as the parent’s smile. After the day is done, Jared and Claire are going out drinking and insist on bringing Shaun, but at the club, Shaun says he has to go home as Claire assures him they won’t stay long. He has a flashback to when he was a boy and Colleen came to see him, asking about the pornographic magazine saying its nothing to be embarrassed about. She tells him she thinks he is really cute and he says she smells like bubblegum and she calls him over to the bushes. She wants to see his privates, but he wants a kiss but she only did it as a cruel joke. Back at the bar, he cheers both Jared and Claire for the great day they had at the hospital. 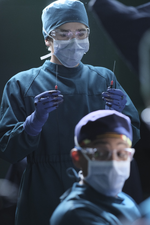 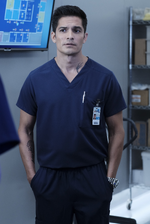 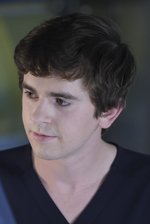 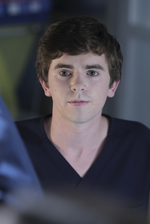