"I'm a freak too. People used to call me that too because I am not neurotypical. And for a long time I was alone. And sometimes that felt easier because it is hard to be around people when you are not like them. But now I have Dr. Glassman and a female roommate and a girlfriend who is only annoying some of the time. If you are cured, you can be outdoorsy, or you can stay inside and have phone sex. It's your choice."
—Shaun giving a pep talk to Tara

"SFAD"[1] is the seventh episode of Season 3 of The Good Doctor. It is the forty-third episode overall, and aired on November 11, 2019.

The next morning, Neil is still reeling from losing his pregnant patient Patricia Fields. He walks into the kitchen and thinks Audrey is making breakfast for him, but she admits that instead, she ordered it and managed to keep it warm. He tells her that she doesn’t have to do this and that he is fine. Instead, Audrey gets closer to him, and asks Neil if he got any sleep. He tells her that he got enough. Audrey then tells her boyfriend that what happened to Patricia was not his fault. “She knew the risks, and she made a choice to save her baby,” Audrey says. “I bet she’d make the same choice again.”

Meanwhile, Carly is away at a conference this week, which presents a new hurdle in the for Shaun since Carly keeps text-messaging him. Shaun seems to be under the impression that he doesn’t have to answer Carly’s texts if she doesn’t pose a question. When he doesn’t reply and receives a “face with rolling eyes” emoji, he FaceTimes Lea at her work and asks what it means.

At the hospital, Melendez, Shaun and Park work on another patient, who's name is Tara), a young woman with severe combined immunodeficiency otherwise known as: “Bubble Boy Disease”. She comes in with infected tissue on her right lung, which requires an operation. During said procedure, Dr. Melendez hesitates to make the first cut, and Dr. Lim takes notice. She encourages him to talk someone, but he says he’d prefer to focus on his current patient, rather than his previous one.

After the surgery, Tara spikes a fever and begins to show early signs of sepsis. Dr. Park thinks they can do more than just treat her infection, and pitches to Dr. Melendez on gene replacement therapy. If it works, she’s cured; if it doesn’t, she dies, but Melendez doesn't feel particularly lucky and chooses to with the safer procedure. Rather than completely give up, Dr. Park goes over Melendez and tells Dr. Lim how Dr. Melendez rejected his gene therapy idea, she confronts Melendez and tells him that he can’t dismiss a plausible treatment option out of fear. The benefit of the cure may be worth the risk, she says, and permits Park to present the option to Tara.

She doesn’t think it’s worth it; she’ll still be a “freak,” she says, and she’ll never live a “normal” life. Shaun decides to interject and manages to change her mind, by sharing with her how he's, “ a freak, too [and that] people have called me that because I am not neurotypical, and I used to be alone, like you. Sometimes that was easier because it’s hard to be around people when you’re not like them. But now I have Dr. Glassman, and a roommate who is a girl, and a girlfriend who is only annoying some of the time, and I think it is better than being alone.” Melendez gives Shaun and Park the go-ahead to prep Tara for gene replacement, but warns Park about what’ll happen if he ever goes over his head again. The transfusion is ultimately a success, and Tara is given a hopeful prognosis.

At Dr. Glassman's clinic, Debbie oversteps her bounds on her first day as Glassman’s new assistant/office manager. However, she interrupts him while he’s with a patient, and again when he’s conversing with Dr. Lim. Later, she takes it upon herself to upgrade his computer software without asking him first, at which point he loses his cool. She quits when he raises his voice to her, but agrees to come back after he returns home and apologizes later that night.

Dr. Lim, meanwhile, asks Glassman to have a word with her boyfriend. The hospital president approaches Melendez and makes clear that it was Lim that wanted them to talk. The surgeon tells his superior that he’s fine, but he’s unconvincing. Glassman tells him that it’s OK if he’s not. Sure, Melendez has lost patients before, but he’s never lost a patient that should’ve lived. “You’re not fine, if for no other reason than your boss doesn’t think so,” Glassman says, “and the bigger problem is your girlfriend doesn’t agree with her”.

Elsewhere in the hospital, Claire and Morgan are assigned 12 year old Charlie as their patient. He manages to sneak away on the day that he’s supposed to undergo enucleation — aka the surgical removal of the eye — and Morgan and Claire leave the hospital to go find him. They track him down at a San Jose Giants game, where Morgan catches him eyeing a ‘tween ballpark vendor. She encourages Charlie to confront the young lady, but he chickens out at the very last moment. Still not ready to give up his vision and go blind, Morgan and Claire try to fulfill some of the kid’s wishes. First, Morgan lets him drive her car around an empty parking lot. Afterwards, they take him to a strip club so he can see a naked woman, but the bouncer refuses to accept a cash bribe from Morgan. Charlie begs the medical residents to try one more thing before they head back, but Claire says enough’s enough. She gives him so tough love by telling him that, he can’t pack a lifetime of things he's going to miss into one day. She tells him, how ultimately, his situation sucks, and it’s unfair, but at the end of the day, Life sucks and it’s unfair, and things end before we’re ever ready.

Realizing she took it too far, Claire apologizes to Charlie soon after. She tells him that she lost somebody recently and it hurts a lot. She admit to taking it out on him and that it was unfair, but if he doesn’t have this surgery, he’ll miss out on a whole lot more than what his vision can offer. Claire explains to Charlie, how if he doesn't have the surgery, he won’t ever drink another slushy at another baseball game, or feel the wind in his hair when he speeds down the road, or ever touch a naked woman. She continues by saying how she knows all of this sucks but that it will get ‘less sucky,’ and the part that hurts so much right now will start to hurt less. And life goes on and you will have wonderful moments and you will have sucky moments, but it will be your life. Claire continues by saying that it will likely be a good life. She says she even suspects it might even be a great life. Ultimately, it’s this pep talk from Claire that convinces Charlie to return to the hospital. Before Andrews and Morgan wheel him into the O.R., Morgan tells the attending that she forgot to take Charlie’s vitals, and says she’ll wheel him right out. She then closes the curtain and fulfills Charlie’s last wish by flashing her boobs. When she wheels him out, Andrews asks if his vitals are OK. Morgan says that his “temp might be a little up, but he’s ready now".

Charlie’s procedure ends up being a success. The kid thanks Morgan for everything, but when he calls out to Claire, she’s not there. She’s already left for the night. Morgan catches up to her at a bar and commends her for what a great job she did with their patient. Claire says that she said what she had to get him back to St. Bonaventure, but Morgan refuses to let her downplay her efforts today.

Later on, Melendez pops into Lim’s office and tells her that she’s right. He’s not fine, and he does blame himself for Patricia’s death. He talks about how the blame lies with himself, but that they share the responsibility of Patricia's death. He continues by saying how Audrey is not objective when comes to him because of the nature of their relationship. He adds that if they weren't together, he's not sure anyone would have agreed to let me him do that surgery. He finishes by saying how he thinks Audrey's personal feelings may have led her to overestimate him. Audrey argues that it's impossible, given the current dynamic. Audrey is unconvinced, and instead say things like this will happen again, and that she will make decisions similar to this one. She goes onto saying Neil will have bad outcomes. Bu that doesn’t mean that either of them were wrong. She finishes by saying that her approval bestowed upon Neil had nothing to do with their relationship.

Melendez remains unconvinced and tells Audrey that perhaps, if they weren’t dating, that woman might still be alive, but now they will both have to live with not knowing.

Later that night, he returns home without his now possibly (ex?) girlfriend. He takes out his phone to call her, but it goes straight to voicemail. Rather than leave a message, he hangs up and finishes his drink. 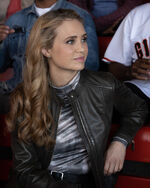