"The Uncertainty Principle" is the seventh episode of Season 4 of The Good Doctor. It is the sixty-third episode overall and aired on January 18, 2021.

Dr. Morgan Reznik discovers her patient’s wealth and obsession with extending his life is a dangerous mix that could end up costing more than he can afford.

Audrey is walking with Claire, Alex, and Shaun, she tells them it is a three day weekend and a full moon. People are going to do stupid things, she wants them to take an extra trauma call in the ER and make themselves available if needed.

Sometime later, there is a patient in the ER at San Jose St. Bonaventure Hospital, she had a fall on a ski hill, it was a trip her husband surprised her with because she is one-year cancer-free. Her husband takes a call outside the room, Jordan overhears that he is a Venture Capitalist and she is intrigued since she has a new product that she would love to introduce to him.

Morgan has a patient with a perforated valve who needs surgery immediately. During surgery, the doctors find out that he has Hirschsprung’s disease, which only babies and young children get. Eventually, when their patient is awake, Alex tells the patient and says this is kind of singular and was wondering if anyone else in the family had the same symptoms as him. He said he modified his genetic code. He did a CRISPR procedure under the guidance of some professionals he knows through his work in China, they sent him some cocktails and his wife injected them into his bone marrow. He believes it will stop him from aging so that he can live forever.

Claire shows Morgan a text she got from Enrique and tells the blonde doctor she thinks she has been asked out on a date. Claire doesn’t want to go on it because they work together, but Morgan points out that being coworkers has never stopped her before.

Later, Claire bumps into Enrique, and decides to tell him that she doesn’t think a first-year should go for coffee with the fourth year because it’s bound to get complicated. He replies to her by saying that he didn't mean for it to sound like a date. Since he is still new to the area, all he wanted to get to know each other.

Shaun is home, he tells Leah that he took a poll about having sex in the shower. She said she heard about it at work and had to field some questions. Leah is putting together some exercise equipment that she wants to sell online. Shaun asks why she has it if she is selling it. She says her ex-husband sent. She explains how they got married right out of high school, not for long, and consider it a big mistake and they both knew it.

Jordan is walking with Olivia and she tells her that she should try out the shoe inserts she designed to reduce inflammation. Jordan says she needs testimonials. Olivia gives her the side eye and says they are all busy enough, and asks if should really be focusing on something so trivial.

Claire goes to see the patient who fell on the ski hill. As it turns out, it is cancer and the treatment is surgery in the next few days. The patient has a panic attack and Claire has to give her oxygen, but it is actually the tumour pressing on her throat, Claire turns to Olivia and tells her that the patient has to go into surgery right away. Claire seeks out her husband, tells him that they removed her thyroid, and there may be a deeper issue.

He says it was so hard, waking up every day and not knowing If his wife was going to be there another year. He sat there and watched them put poison into his wife because she might die. She tells him to go for a run, take a break, he needs to get through this for her.

Shaun goes to see Leah in her office and asks her why she didn’t tell him that she had an ex-husband, she says because he wasn’t important. But Shaun pushes the issue, and he says that at one point in her life she thought he was important, and now she doesn’t anymore. She says she knows he doesn’t like change, but he is working every day to change himself.

In the end, Claire has coffee with Enrique after all. She finds out that he lives in a van right on the hospital parking lot because it is convenient.

The patient who was undergoing CRISPR procedure goes into cardiac arrest, Shaun says something else is killing him. The team meet together and Shaun says the nerves are under attack. Alex tells the patient that they are going to treat him with targeted drug therapy. The man’s pain shifted, Alex says his spleen is about to rupture, he gets a transport team called.

Olivia tells Claire’s patient that she has LFS, a predisposition to developing many cancers. There was a toxin in her environment that played a role in this, but there will be other triggers in the future. Her body is super sensitive. Jordan tells her that she knows it is a shock, but most cancers are treatable if known early enough. This is good, they know what they are dealing with, they are warned and will be ready. Claire then tells the patient's husband. She includes that if he wants to get out, he should do so before she needs him most.

Alex tells his patient that they are going to have to reverse the CRISPR. Although he is against it, his wife asks for time alone with him to try to encourage him to do it. But in the end, he doesn’t.

The other patient is ready to leave the hospital, her husband is there to pick her up and he says he is selling his business, he doesn’t want to spend anymore time away from her.

Olivia tells Jordan that her Venture Capitalist lead sold his business, she is sorry, but she tells her that her feet are killing her.

Shaun tells Leah that he is ok to have sex in the shower, he got a cow bell to ring in an emergency and he moved the shampoo bottles for her.

Claire tells Enrique that she is willing to be only friends. Then she messages Audrey and finds out she is about to have dinner, Claire says she will bring the wine. When Claire gets there, she sees her broken up bike hiding behind Audrey’s car. 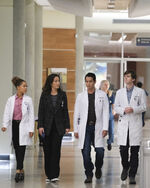 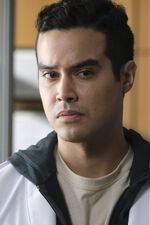 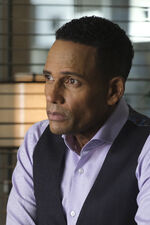 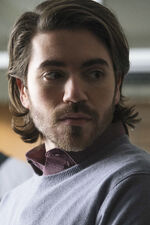 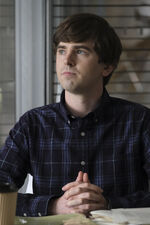 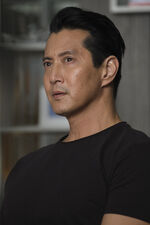 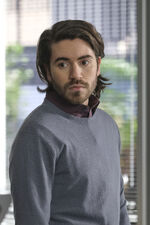 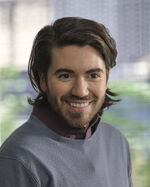 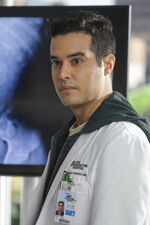